Skip to content
SPONSORED BY • TRULY HARD SELTZER • SAMUEL ADAMS • DEX IMAGING
Welcome to the Trivia Challenge. Test your knowledge of bowling and its history by answering the true/false questions below. Following each question, you will have an opportunity to explore the topic further within the Virtual Vault. Good luck and have fun!
Question 1
In the 1970s, the American Bowling Congress provided coupons on the back of cereal boxes to encourage families to attend local bowling alleys.
Correct! 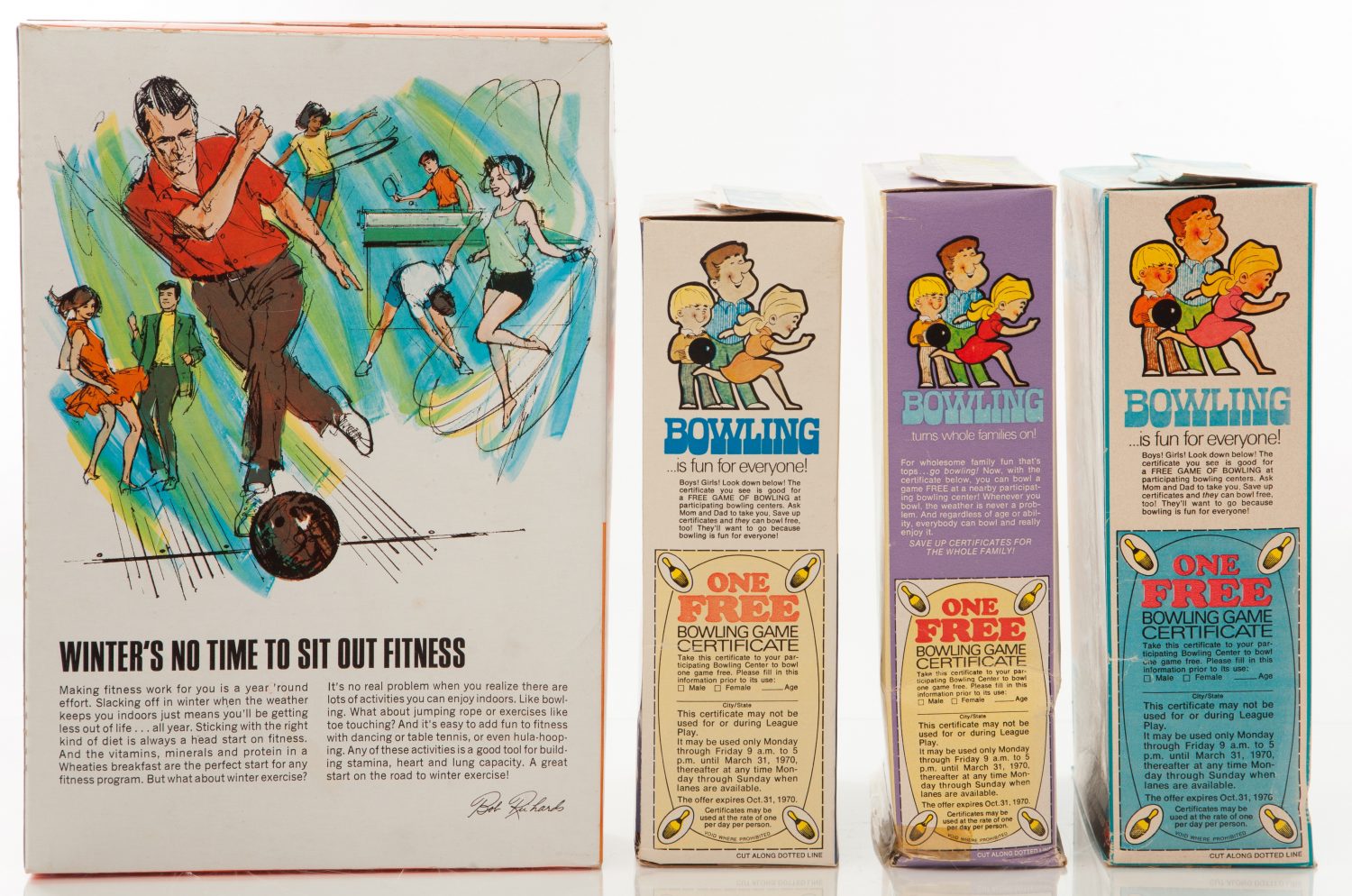 CEREAL BOWLERS
In 1970, Americans could find bowling everywhere: on television, in recreation centers and even in their cupboards and refrigerators. Popular cereal and milk brands provided American Bowling Congress coupons on their packaging. This was likely part of an ABC initiative to bring more families into bowling centers. If children led their parents to a bowling […]
More Info On This Topic
Question 2
American Machine & Foundry (AMF), maker of the Pinsetter, unveiled the AMF Monorail at the 1965 World’s Fair in New York City. The company envisioned the Monorail as a solution to congested roads in urban environments.
Correct! 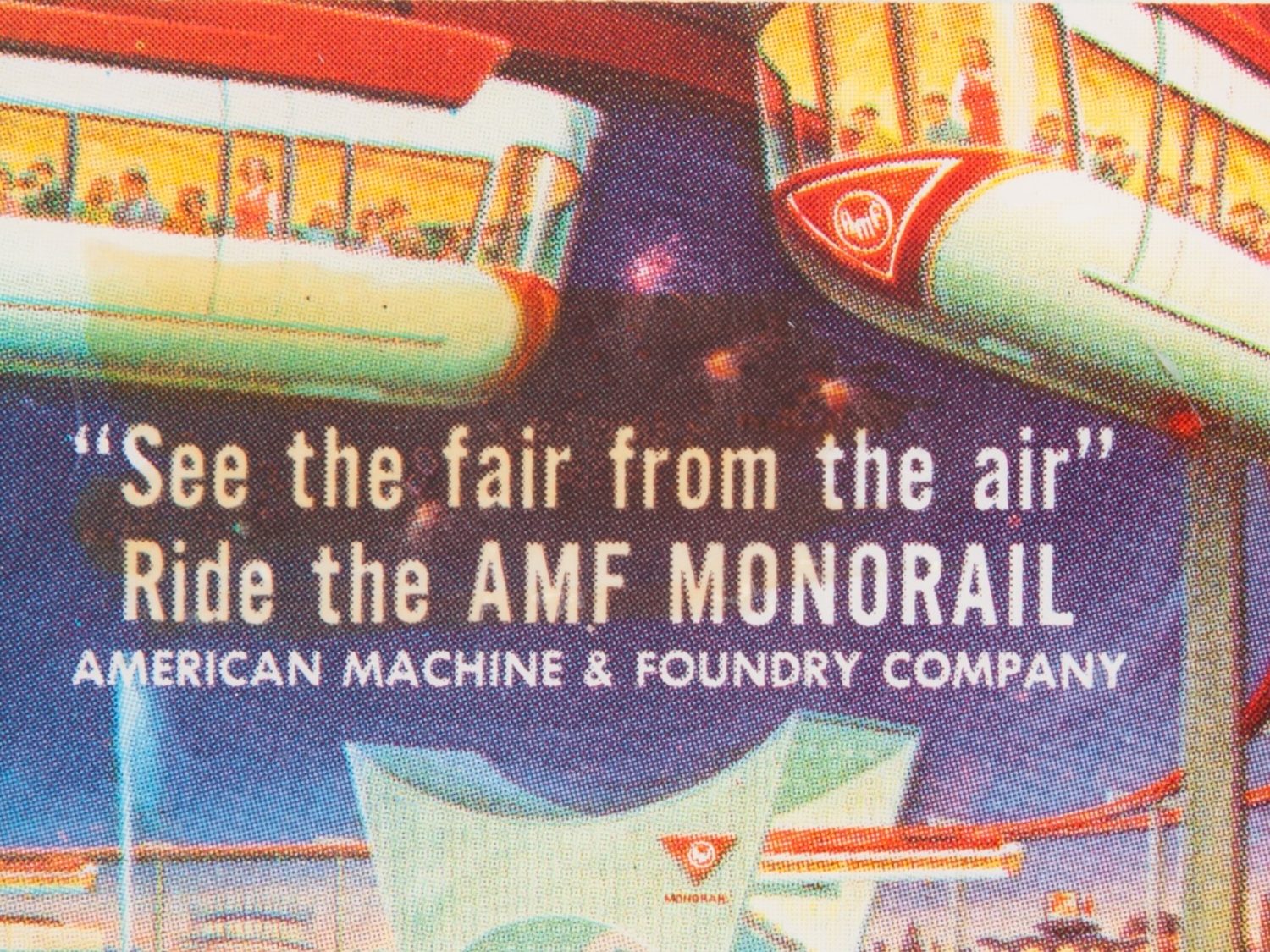 A TALE ABOUT THE MONORAIL
American Machine and Foundry (AMF) made a name for themselves in the production of automated bowling equipment. The company, however, had far more products than just the Pinspotter. At the 1965 World’s Fair in New York City, the firm showed off the AMF Monorail. There were seven of the two-car trains available for test rides. […]
More Info On This Topic
Question 3
In search of a perfect score, some bowlers have been known to revert to a higher power and utter the following prayer, "Dear Lord I have but one request and I shall not ask for more, That I before I’m laid to rest might bowl a perfect score."
Correct! 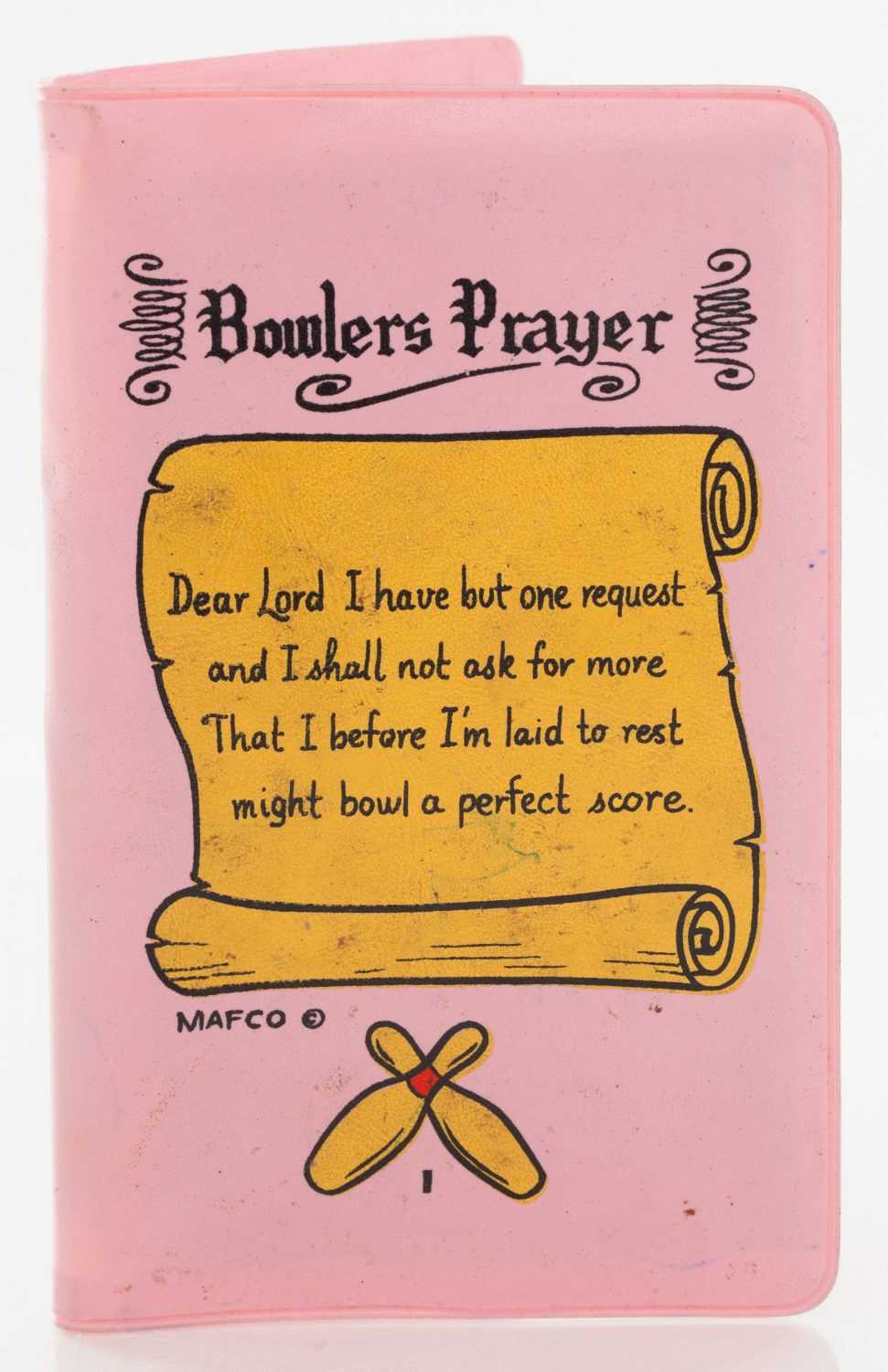 A POCKET-SIZED PRAYER
The search for the elusive 300 is enough to keep any bowler on the lanes. But when practice and elbow grease aren’t enough, people may turn a higher power by reciting the Bowler’s Prayer. This women’s wallet made it easy to remember with the well-known verse lining the outside cover!
More Info On This Topic
Question 4
In 1987, Del Ballard won the Seagram’s Cooler U.S. Open and won $100,000, the largest payout in PBA history at that time.
Correct! 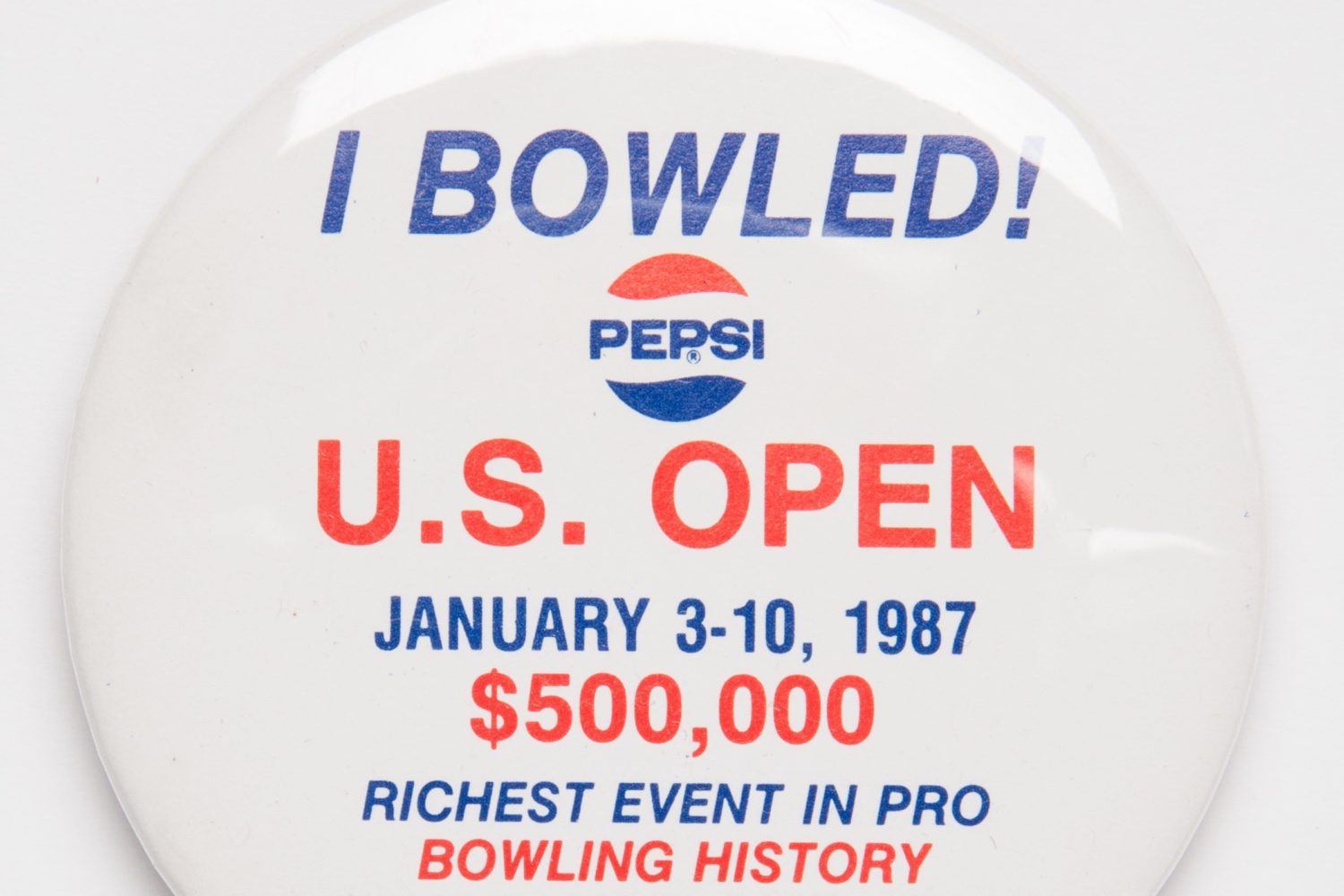 LARGEST PURSE YET
The stakes were high at the Seagram’s Cooler U.S. Open at Narrows Plaza Bowl in Tacoma, Washington. The event in 1987 was sponsored by the Professional Bowlers Association and offered a total purse of $500,000, the largest payout in PBA history. Del Ballard took home the win and the $100,000 grand prize, but all contestants […]
More Info On This Topic
Question 5
In the 1980s, a self-help cassette tape entitled "How You Can Bowl Better Using Self-Hypnosis" promised to improve a bowler’s score by 20 pins.
Correct! 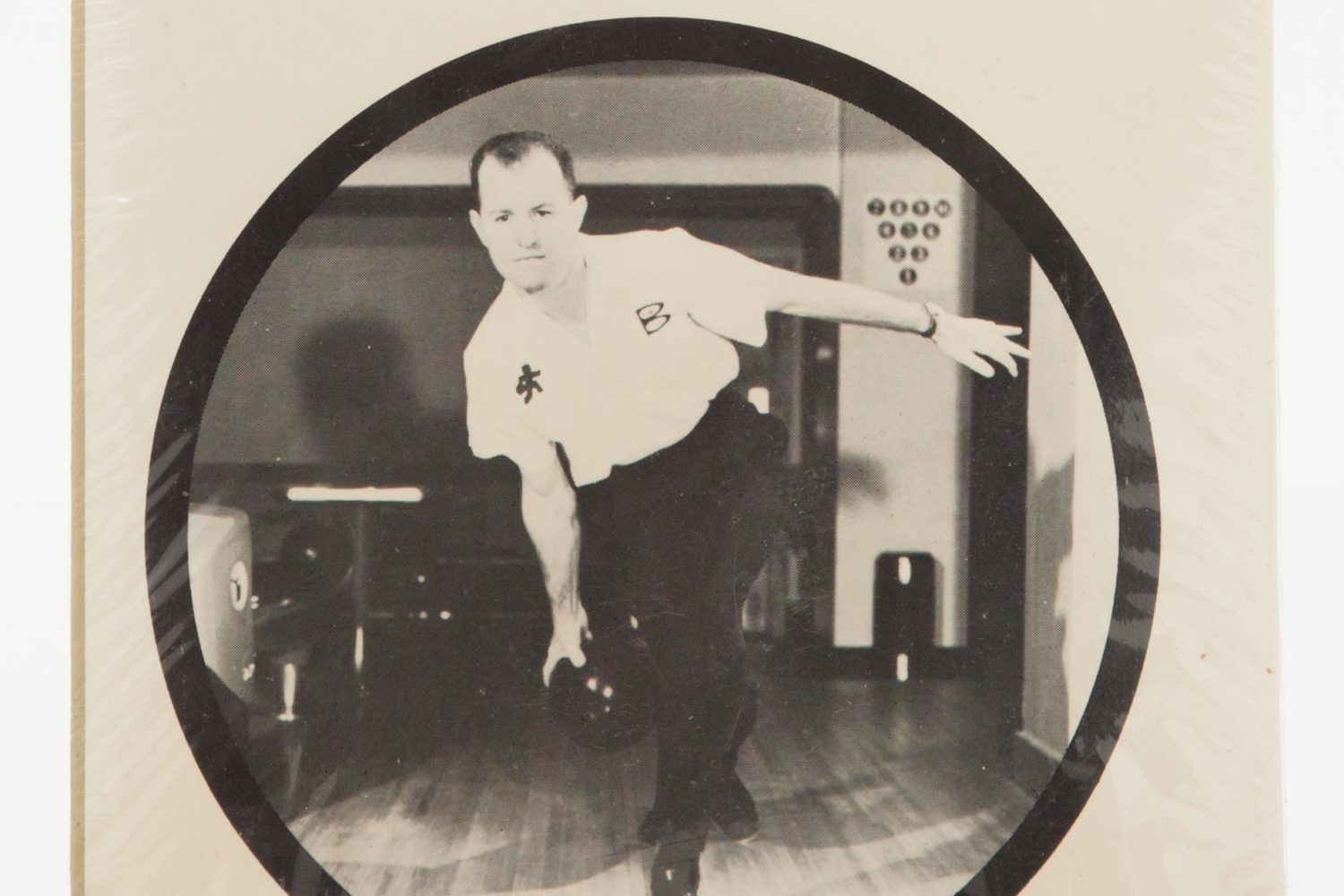 YOU’RE FEELING VERY SLEEPY
Some bowlers rely on extra practice or advice from peers when trying to enhance their game. Others choose unconventional methods. This self-hypnosis cassette tape promised bowlers would improve their scores by up to 20 pins after one week of listening. It’s unclear how many people tried this technique or how successful it was, but it […]
More Info On This Topic
Question 6
The first National Bowling Month was held in September 1960.
Correct! 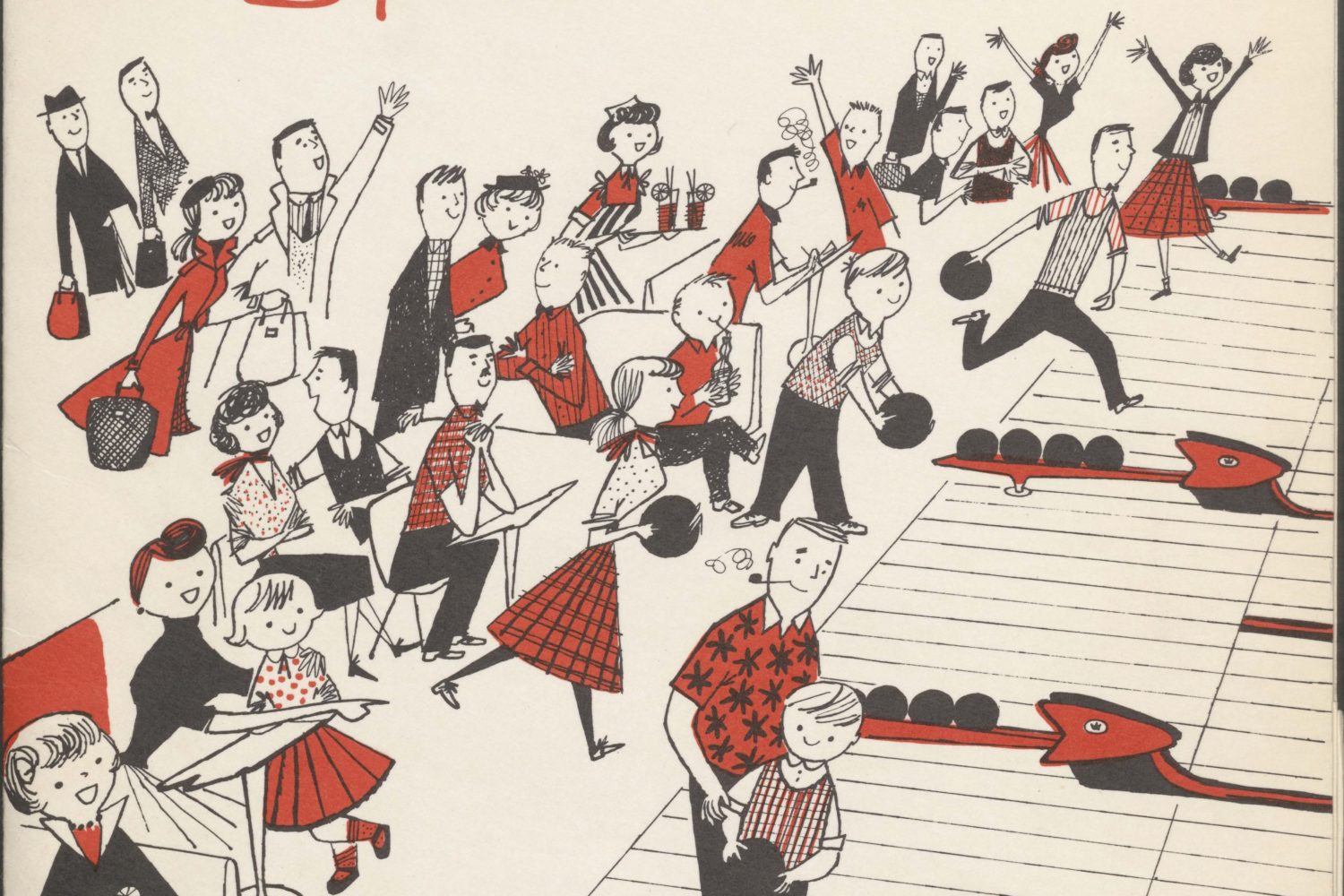 CELEBRATE NATIONAL BOWLING MONTH
Bowling was in the middle of its golden age in 1960, so a month dedicated to the sport seemed fitting. The first National Bowling Month was held in September of that year, and Brunswick issued promotional materials to publicize the milestone. Bowling centers anticipated large turnouts, hosting Learn to Bowl clinics and other events to […]
More Info On This Topic
Question 7
Sylvia Wene (later Sylvia Martin) became the first woman to bowl a perfect game in Eastern League play in March 1951.
Correct! 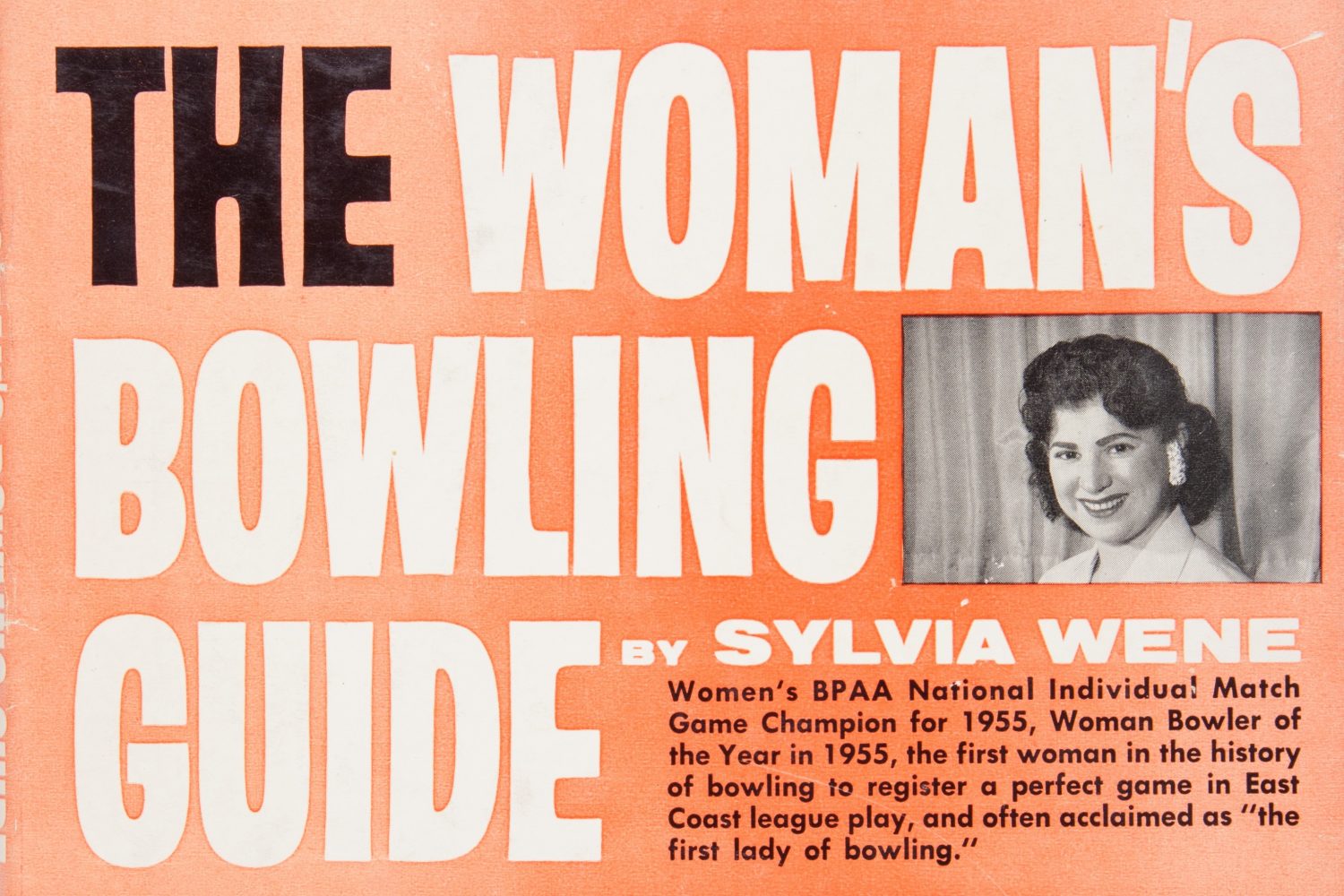 THE WOMAN’S BOWLING GUIDE
Published in 1959, this bowling guide provided women with technical bowling tips alongside on-trend fashion and makeup tips. Author Sylvia Wene (later Sylvia Martin) was no stranger to the lanes. In March 1951, she became the first woman to bowl a perfect game in Eastern League play. She continued as a top player and, in […]
More Info On This Topic
Question 8
The International Bowling Museum and Hall of Fame is located in Arlington, Texas.
Correct! 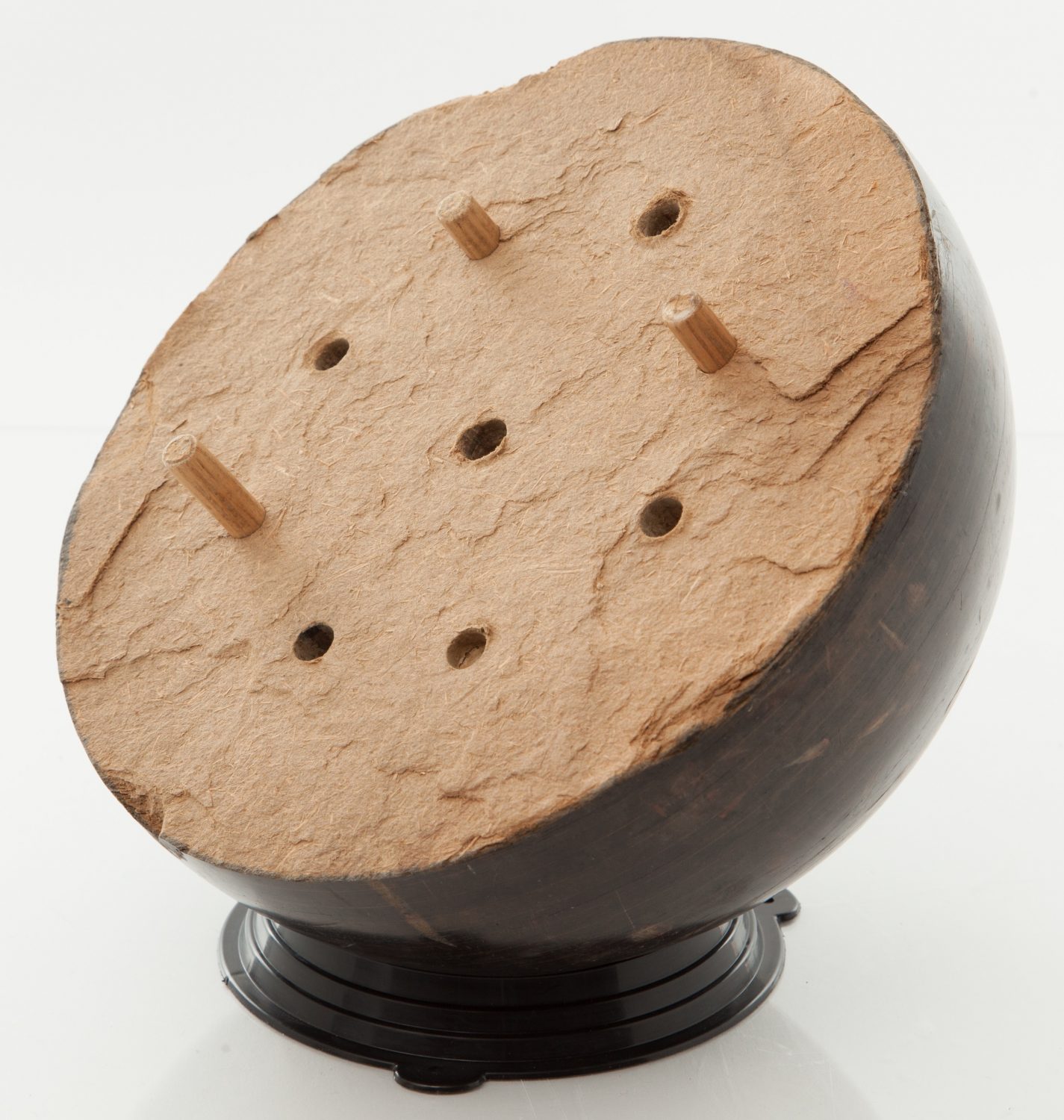 KNOCK ON WOOD
Before the Brunswick Mineralite ball was introduced in 1906, bowling balls were made of wood, specifically lignum vitae, a durable hardwood made from trees native to the Caribbean and South America. Rather than a rubber core, these balls had a nearly solid wooden one. The two halves of the ball were held together with wooden […]
More Info On This Topic
Question 9
The American Bowling Congress (now part of the United States Bowling Congress) sets the exact specifications for bowling pins in an effort to ensure fair play.
Correct! 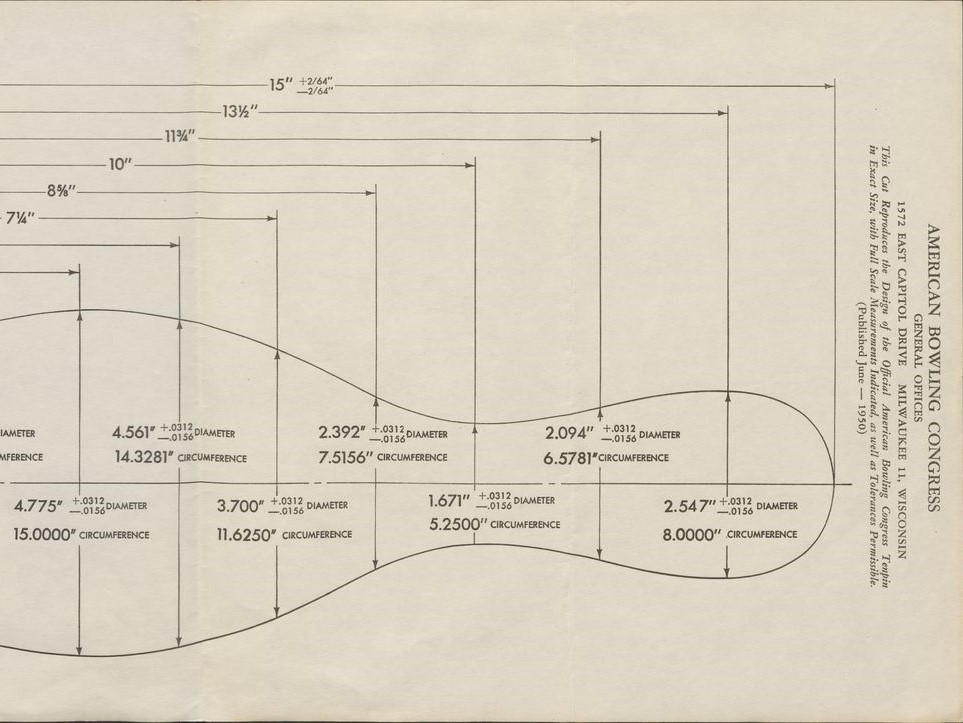 SETTING THE STANDARD
Though the bowling pin may look simple, it is anything but. Every bowling pin is built to exact specifications in an effort to ensure fair play. The American Bowling Congress (now part of the United States Bowling Congress) has been responsible for setting these standards and as you can see in this image, every curve […]
More Info On This Topic
Question 10
The AMF Pinspotter used a carpet belt, known as the Magic Carpet, to retrieve balls and felled pins after a roll.
Correct! 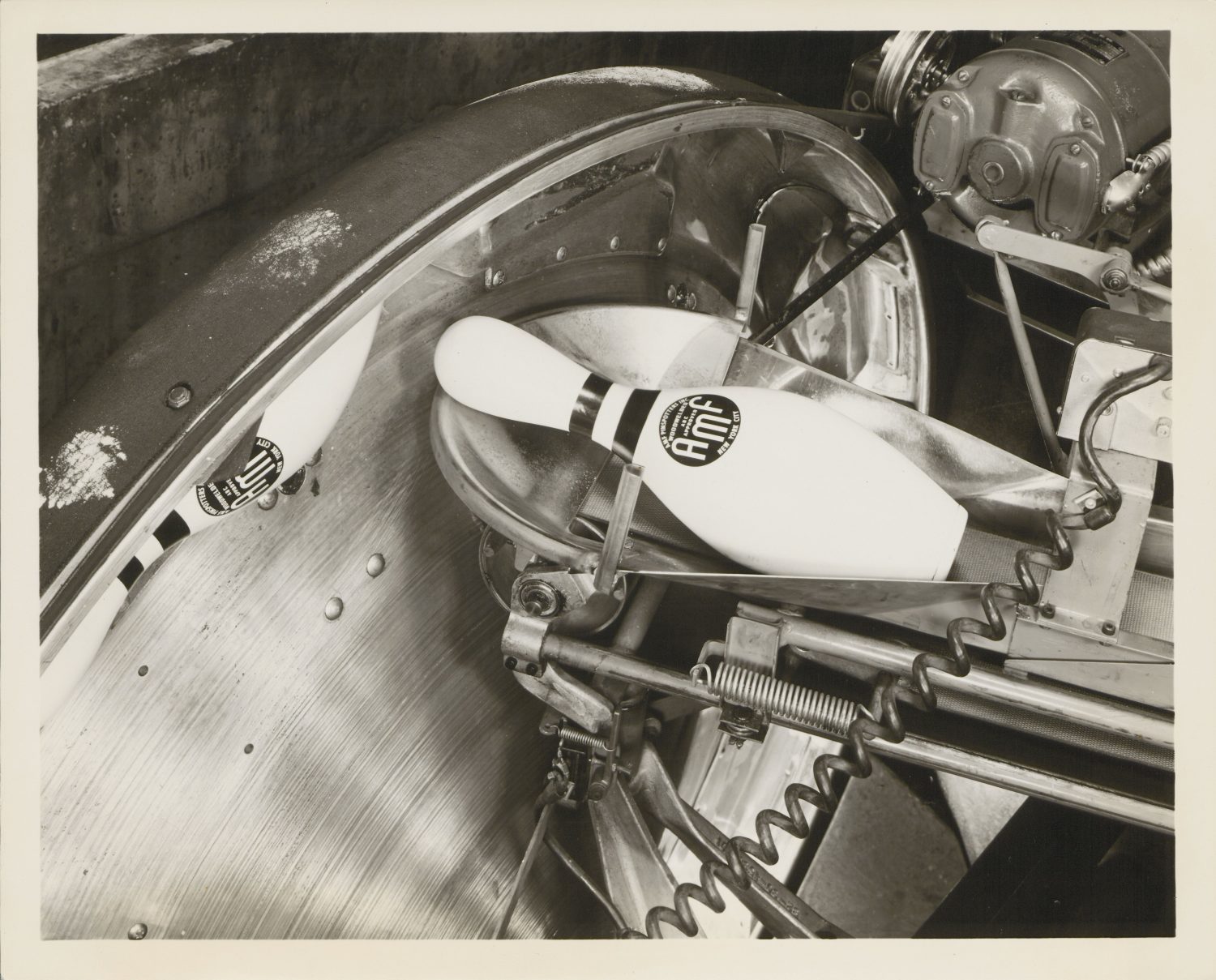 A PRACTICAL PINWHEEL
The AMF Pinspotter used a carpet belt, known as the Magic Carpet, to retrieve balls and felled pins after a roll. The ball would be pushed off the belt to the ball return, while the pins would move into a pin elevator called the Pinwheel and onto a distributor that would drop them into cups […]
More Info On This Topic
THAT’S RIGHT.
EVERYTHING WAS TRUE.
Thanks for playing the Trivia Challenge presented by Truly Hard Seltzer. True to our mission, we hope you learned a bit about bowling and its rich heritage. To explore the Virtual Vault and expand your knowledge of bowling, click below.